Rab C Nesbitt, for many the finest comedy series to have come out of Scotland, was set in one of the most deprived areas in Glasgow and tackled serious social and political issues with a savage wit.

The best Scottish comedy of the 90s 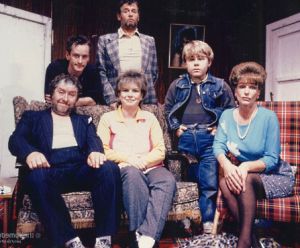 Rab C. Nesbitt was a highly popular Scottish TV comedy which ran for eight series totalling 52 episodes between 1988 and 1999.

The comedy was based around Rab Nesbitt, an alcoholic, dirty, long-term unemployed man from Govan, one of Glasgow's worst deprived areas.

The series dealt satirically with the problems and daily life in one of Scotland's poorest districts. Despite the social sensitivity of many of the issues featured, such as alcoholism, domestic violence or mass long-term unemployment, the series managed to create sympathetic characters and humouristic situations.

Rab C. Nesbitt was a hit in Scotland, where the programme had a large following. Written by Ian Pattison and directed by Colin Gilbert and Ron Bain, Rab C. Nesbitt started life as a recurring character in the BBC show Naked Video in 1986 before it was granted its first series at BBC Scotland in 1990. The show run until 1999 and won the BAFTA Scotland award for Best Entertainment Programme.

Rab C. Nesbitt
Played by Gregor Fisher, Rab is the central character in the series. He is an alcoholic, dirty, foul-mouthed and rowdy “big bastard” who makes life miserable for his wife Mary and his children Gash and Burney, yet manages to appear as a sympathetic character in the series.
Always untidy and not shaven, dressed in an old broken blue suit under which he wears a dirty fish-net vest, he defines himself as a “street philosopher” and spends all the time telling his views on life while under the constant effects of alcohol.

Mary Nesbitt
“Mary Doll” Nesbitt, played by Elaine C. Smith, is Rab's long-suffering wife. She keeps the family together despite her alcoholic husband and takes sole responsibility for their two kids Gash and Burney.

Gash Nesbitt
Played by Andrew Fairlie, Gash is the Nesbitts' elder son. He is an easily influenced lad who is often involved in vandalising, drugs, or fighting with his little brother Burney.

Burney Nesbitt
Played by Eric Cullen, Burney is the Nesbitts' younger son. He is an acute and intelligent boy who has to put up with his alcoholic father and his abusing brother. Cullen left the programme after series 3 and his character was replaced by Screech Nesbitt (David McKay) in the new role of Rab's nephew.

”Jamesie” Cotter
James Cotter, played by Tony Roper, is Rab's longtime best friend. In true Glaswegian style, he is often seen carrying a 750 ml bottle of Irn-Bru, Scotland's national soft drink. Although married to his wife Ella, he is a womaniser who spends most of his time getting drunk with his best pal Rab.

Ella Cotter
Played by Barbara Rafferty, Ella is Jamesie's unhappy, bitter wife and Mary Nesbitt's friend. She is all times scowling at her husband Jamesie and often thinking about killing him.

Rab's best friends:
Other regular characters in the series are Rab's best friends Andra (Brian Pettifer) and Dodie (Iain McColl), who are also drinking regulars at the local boozer, The Two Ways Inn. The barmen at the pub are Dougie (Charlie Sim) and Norrie (John Kazek). 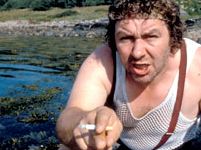 The central character in the series, Rab Nesbitt is an unemployed alcoholic who spends his time boozing and is often in trouble with the authorities. Yet, Nesbitt ignores he is making life miserable for his family and sees himself as a “street philosopher” who is always eager to tell his views on life to everyone.

Rab's philosophical monologues are in many ways reminiscent of Scotland's strong Celtic storytelling tradition. His speeches are directly addressed to the viewer and deal with issues in a clear, straighforward, and witty manner. His sincerity allows him to talk openly on any controversial issue ranging from alcoholism to poverty.

Besides the series' irreverent dark humour, the programme also poke fun at the expense of the characters themselves -from Ella Cotter's faux-leopard coat in true Govan fashion style to Rab Nesbitt's perennially dirty headband- as well as at working-class clichés and at the Scottish national identity.

Perhaps the most obvious Scottishness at the core of Rab C. Nesbitt is the Glaswegian Scots dialect spoken by the characters in the series, which adds the endearing pinch of local flavour to the programme, as well as often making dialogues incomprehensible for many non-Scots without the help of subtitles.

Rab C. Nesbitt was the most popular Scottish comedy of the 90s. The show's highly satirical approach to Glaswegian stereotypes made it a cult comedy for many in Scotland.

[DVD] Rab C. Nesbitt
“Some place Govan eh?, where else can you get a fish supper at 9:OO AM?, simple, just steal it off a drunk that's been lying pished outside a close all night.”
- Rab Nesbitt on life in Govan
Buy it from Europe [DVD Zone 2]..»
Buy it from North America [DVD Zone 1]..»