Scottish television series 'Taggart' is the world's longest-running police drama on TV. First aired in 1983 and now exported to over 80 countries, the popular show revolves around a group of detectives in Glasgow's Maryhill area. 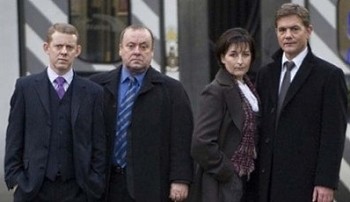 The idea for the series came about when Scottish Television's Robert Love and writer Glenn Chandler began working together in the early 1980s; little could they imagine that their show would still be going strong after more than 25 years.

The show went on for a decade with great critical acclaim, and even when McManus died in 1994 the series continued without changing the name such was the popularity of the show.

During the past three decades, the series have seen the arrival of new characters, new writers, and a new production team, but the show still remains a national institution and Scotland's top television export.

Taggart's Glasgow crime is distinguished by the realism of the programme. Many of the stories are based on true crime, police officers are consulted about the making of scenes, and the make-up team often visits the forensic department at Glasgow University looking for realistic injuries to reproduce on-screen.

But the true appeal of the show, what sets Taggart apart from other cop shows on TV, is undoubtedly the City of Glasgow and its portrayal of Glaswegian life and dark humour. The characters' Scottish accent adds uniqueness to the series, as the show soon became synonymous with McManus' catchphrase "Therrre's been a murderrr".

Made by Scottish Television network STV, the Scottish uniqueness of the series is at the core of Taggart's international success.

The popular show is based in the Maryhill area of Glasgow, historically a working class area of the city. The exterior shots of Taggart are always taken in different parts of the city, and occasionally some scenes are shot in Highland landscapes just a few kilometres north of Glasgow.

Ironically, Taggart was never filmed at the Maryhill Police Station. However, that has not deterred fans from all over the world coming to the police station at Maryhill to take photographs.

For many years Glasgow was known as Europe's crime capital with the largest slum area in Western Europe. The city had very wealthy areas, but also large pockets of poverty and social deprivation. Although the city has changed greatly since the 1980's, the Glaswegian character and dry wit still provides the unique attractiveness of the show.

The Scottish west coast Glaswegian accent used by the characters in the series also has proved popular among the audiences, which rapidly associated Taggart with Mark McManus' catchphrase "Therrre's been a murderrr".

In Scotland, the show is a national institution which has seen almost every major Scottish actor appearing in an episode at some point in their career.

The internationally famous series is also Scottish Television's top export. Taggart has been broadcast in more than 80 countries in the four continents, where the "murderrrs" have been subtitled and dubbed into many languages including Japanese, German, and French.

First broadcast in 1983 featuring Mark McManus as Detective Chief Inspector Jim Taggart, the former boxer and miner turned actor was the ideal man for the role of a Glaswegian tough, experienced detective who had worked his way up through the ranks.

Taggart was assisted by Detective Sergeant Peter Livingstone, played by Neil Duncan, who represented the new generation of young graduates entering the police force. Because of their two different backgrounds, the two detectives often had a difficult relationship with each other. 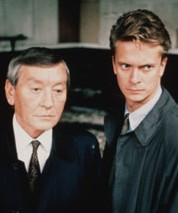 In 1987 the character of Mike Jardine, played by James MacPherson, was introduced, and later on in 1989 female Detective Sergeant Jackie Reid, played by Blythe Duff, was introduced as Neil Duncan decided to leave the series.

The character of Jim Taggart was played by Mark McManus until 1994, when the actor died of terminal pneumonia. By that time the series had become so popular that over 2,000 people attended the funeral of Taggart's leading actor.

Following the wishes of McManus, as well as the general audience, actors and crew decided to carry on with the series and keep the show's original name – Taggart.

The 1995 episode Black Orchid opened with Taggart's funeral and saw teetotaller Mike Jardine being promoted and becoming the new boss in Maryhill. MacPherson's puritanical and compassionate character was a stark contrast with McManus' rude, no-nonsense policeman.

The series became more of an ensemble piece as the team got two new characters, Detective Constable Stuart Fraser, played by Colin McCredie, in 1994, and Detective Inspector Robbie Ross, played by John Michie, in 1998.

After 15 years in the job, Macpherson left Taggart in 2002 as his character Detective Chief Inspector Mike Jardine was killed off and was replaced by Matt Burke.

In 2002 Mike Jardine was replaced by Detective Chief Inspector Matt Burke, played by Alex Norton, a former Special Branch officer which immediately showed himself to be grumpy and unsparing.

Detective Chief Inspector Matt Burke has been widely hailed as the first credible successor to the eponymous character played by Mark McManus.

In 2004 Taggart's actors and crew were honoured by the City of Glasgow's Lord Provost for bringing Glasgow to millions of people around the world.

[DVD] Taggart
Scottish television series 'Taggart' is the world's longest-running police drama on TV. First aired in 1983 and now exported to over 80 countries, the popular show revolves around a group of detectives in Glasgow's Maryhill area.
Buy it from Europe [DVD Zone 2]..»