Once a very popular dish in Ireland, nettle soup is simple to cook, economic and highly nutritious. 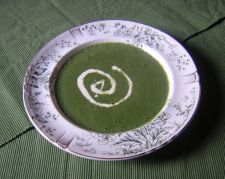 Nettles could be found anywhere in the country and were free. An ideal food for those with few resources, nettles were also known to be very nutritious.

"Eat nettle soup three times in May,
and for a year keep rheumatics away"
Traditional Irish saying

The Stinging Nettle or Common Nettle, Urtica dioica, is a perennial plant which grows abundantly in Atlantic Europe. In the Celtic nations nettles were a well known natural medicine against many illnesses, and old folk particularly used to apply stinging nettles to the skin for treating rheumatism and arthritis.

As the Irish saying goes, nettle soup was believed to be a very nutritious food and traditionally people also ate it to prevent rheumatism. Indeed, nettles are very healthy and rich in vitamins A, C, D, calcium, iron, manganese and potassium.

Cooked nettles have a similar flavour to spinach. There are many different ways to prepare Irish nettle soup, but the dish itself is very basic and easy to cook. Just remember to wear rubber gloves when picking the nettles and choose preferably the younger leaves. And don't worry about the nettle soup stinging your tongue: the stinging chemicals from the nettles disappear as the plants are cooked.

1) Wearing rubber gloves, wash the nettles under cold running water and remove the stalks. Finely chop the nettle leaves.
2) Melt the butter in a saucepan and add the oatmeal, stirring constantly until golden brown.
3) Add the water and bring to the boil.
4) Add the nettles and seasoning. Bring back to the boil and then reduce the heat and simmer for 40 minutes.
5) Puree the soup in a blender and return to the saucepan.
6) Taste for seasoning and serve hot.

Distribute the hot soup among 4 soup bowls. Sprinkle with pepper or add a swirl of cream, and serve with chunks of Irish soda bread.