The iconic drink, a symbol of Irish identity and one of the best-known beer brands around the world, is now 250 years old.

Like the shamrock, the harp or the leprechaun, Guinness has long been regarded as a symbol of Ireland.

First brewed in Dublin's St James' Gate in the 1770s, the popular beverage is entangled with the concept of Irish identity and Irish lifestyle.

As the country's national drink, Guinness is the best-selling alcoholic drink in Ireland, where sales are worth around €2 billion annually.

The Irish brand is also one of the nation's most successful international exports: Guinness is now sold in over 150 countries and an estimated ten million glasses of 'The Black Stuff' are enjoyed every day around the world.

The famous Irish beverage is a magnet for international tourists in Ireland, who come in droves to the Guinness visitor centre in Dublin, making the company's Storehouse the city's top tourist attraction with over a million visitors a year.

Now celebrating its 250 anniversary, Guinness is organising a series of worldwide events to toast on the decision by company founder Arthur Guinness to lease a run-down brewery in Dublin's St. James' Gate in 1759.


From local brew to international brand

The popular Irish beer owes its name to Arthur Guinness (1725-1803), an entrepreneur from Co.Kildare who founded the Guinness brewery business.

Guinness started brewing Ale and Porter, a new type of dark beer which was in fashion at the time. Also known as Stout, his dark beer became so successful that by 1799 he had stopped brewing Ale altogether.

By the time Arthur Guinness died in 1803, his brewing business was well established and already exporting beer abroad. Successive generations of the Guinness family developed the business and by 1886 Guinness had become the largest brewery in the world with a production of over 1.2 million barrels a year.

At the forefront of technological and marketing innovations, Guinness kept expanding overseas during the 20th century. In 1932 the company moved its headquarters to London following restrictive trade laws enacted by the Irish Free State, and in 1986 acquired Scottish company Distillers Company Ltd in a corporate move that ended the involvement of the Guinness family in the business board.

In 1997 Guinness Plc merged with British company Grand Metropolitan Plc to form a new business called Diageo Plc, which became the largest multinational alcoholic drinks company in the world. In Ireland, the company directly employs over 2,000 people and about 20,000 indirectly. The Guinness family's share in Diageo Plc is 1%, worth an estimated 200 million euros.

Guinness is a dark-coloured type of beer known as 'Stout'. Brewed with dark malts, the Stout has a distinctive coffee-like or burnt flavour.

The specific recipe of Guinness Stout is of course a closely guarded secret, but the brewing basics are down to roasting part of the barley in order to obtain the brew's dark colour and malty taste. The brew is then pasteurised and filtered through a mix of nitrogen and carbon dioxide which creates Guinness' famous bubbles and smooth creamy head.


"Good things come to those who wait"

For many, part of the Guinness drinking appeal is the ritual of serving "the perfect pint", consisting on a lengthy double pour which according to Guinness should take 119.53 seconds.

Served at a temperature of 6°C (42.8°F), Guinness should be poured first at an angle of 45 degrees until the pint glass is three quarters full. The glass is then rested until the surge has settled to perfection, after which the remainder of the glass is then filled with a slow second pour until if forms a creamy head.

Guinness promotes this waiting ritual on its advertising campaigns, inspired on the Irish philosophy of "good things come to those who wait".

"Guinness is Good for You"

In the 1920s Guinness ran its famous advertising slogan "Guinness is Good for You" after market research found people saying they felt good after a pint. In the age of corporate responsibility, Guinness no longer uses the slogan and calls on their customers for responsible drinking.

However, a number of studies have claimed that Guinness Stout contains antioxidants similar to those found in certain vegetables which can be beneficial against cholesterol on the heart.

Often described as "meal in a glass" due to its heavy, rich malt flavour, Guinness is actually a relatively light drink as it only contains 198 kcal per pint, that is less than skimmed milk or orange juice.


Celtic creativity at the core of Guinness' marketing success

Much of Guinness' international success has been due to the company's ever famous advertising campaigns.

Guinness' first advertising campaign was launched in 1929 when the company was already selling over one million barrels a year across the world. Posters with catchphrases such as "My Goodness My Guinness" or the famous "Guinness is Good For You" are still reprinted on

postcards, beer mats, posters and clothing. The early advertisements featured exotic animals like the toucan, which eventually become as much a symbol of Guinness as the harp.

Guinness is also known worldwide for their award-winning television adverts, such as the 1999 advertisement "Surfer", which was voted the best television ad of all times by British newspaper The Sunday Times and TV station Channel 4.

In Ireland, Guinness TV advertisements have enjoyed a huge success, like the 1994-1995 "Anticipation" campaign which catapulted the ad's soundtrack to the top of the Irish charts for several weeks, or the 2003 Christmas ad, based on James Joyce's 'The Dead', which has been run every Christmas since then.

But Guinness' marketing innovations are just more than TV advertisements. The business sells millions of Guinness-branded merchandise every year, from clothing to gourmet foods. Guinness merchandise is also given away in many pubs around the world on Saint Patrick's Day, Ireland's national day.

Another well known marketing icon created by the company is the famous Guinness Book of Records. The annual reference book was born in 1955 after the St James' Gate brewery manager got the idea on a pub debate over which was fastest game bird in Europe.

During the Middle Ages Irish pilgrims from all across the island gathered at Dublin's St James' Gate to set sail for St James of Compostella. Now the roles have reversed and it is people from all over the world which come on a pilgrimage to St James' Gate to visit the shrine where Guinness was born over 200 years ago. 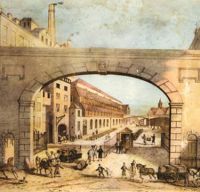 In 1759 Irish entrepreneur Arthur Guinness leased a run-down brewery at St. James' Gate in Dublin, and since then the St James' Gate brewery has been at the core of the Guinness' success story.

Growing continuously as the company's business kept expanding, St James' Gate Brewery became the largest brewery in Ireland in 1838 and the largest in the world in 1914. The brewery also owned many streets in the area, which were used as housing for brewery employees.

St James' Gate Brewery is still the largest brewer of Stout beer in the world. It is also Dublin's top tourist attraction; every year more than a million people pilgrim to St James' Gate, where a visitor centre called the Guinness Storehouse hosts a seven-floor exhibition on the 250-year-old history of Guinness.

Guinness Storehouse is the world's largest Guinness exhibition, taking place over 7 floors and providing an unique insight of all things Guinness from the brewing process to history of the brand and memorabilia.

Built in 1904 to house the brewery's fermentation process, the Storehouse was in use until 1988 and was eventually converted into a visitor centre in November 2000. The core of the building was modelled on a giant pint glass, stretching up from the ground floor to the top floor, which if filled with beer could hold 14 million pints of Guinness. 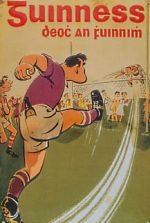 The exhibition shows Guinness' ingredients, brewing techniques, storage equipment, and teaches how to properly taste Guinness. The tour also has sections about the company's founder Arthur Guinness, the history of the brewery at St James' Gate, and the famous advertising campaigns.

The exhibit finishes with a complimentary pint of Guinness at the Gravity Bar on the 7th floor, which is the highest bar in Dublin, boasting a 360° panorama over the city.

2009 marks the historical 250th anniversary of the signing of the lease at the St. James’s Gate brewery by Arthur Guinness in 1759. To celebrate the brand's milestone, Guinness organised a series of events around the world with the largest celebration taking place in Ireland.

On 24th September 2009, thousands of people gathered at the St James' Gate brewery in Dublin to give a toast "To Arthur!" at 17:59 pm. The toast to the company's founder, Arthur Guinness, was simultaneously celebrated in similar events organised by Guinness in New York, Kuala Lumpur and Lagos, as well as in thousands of pubs throughout the world. Guinness estimated that 50 million people in all around the world joined the toast "To Arthur!".

The Guinness party at St James' Gate was opened by Welsh singer Tom Jones, who raised a glass in honour of Guinness at exactly 17:59 pm. Live music was also organised in 30 pubs across Dublin and some of the concerts were broadcast directly to thousands of pubs abroad.

Among the celebrities gathered at the main Guinness party at St James' Gate was Rory Guinness, a descendant of Arthur Guinness, who said that "one of the keys to Guinness is the fact that it comes from Ireland, because the country is what supplies the wonderful barley, the water, all the magic ingredients to go into making such a delicious pint".

Prime Minister Brian Cowen was also among those paying tribute to the popular Irish brand. The Taoiseach spoke about Arthur Guinness as a role model for today’s Irish entrepreneurs and said "The Dublin celebrations are special because this is the home of the black stuff and Guinness is an iconic Irish brand, one that we are very proud of."