World-famous Goonhilly Satellite Earth Station is back in business as new consortium plans to upgrade facilities for communication with deep space missions.


Cornwall will soon be ready to transmit signals to spacecraft visiting the Moon, Mars and beyond.

Goonhilly Satellite Earth Station, one of the world's most famous communications sites, is to be upgraded to support space science missions. 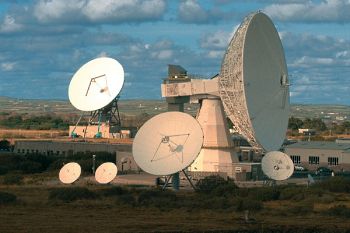 Built in 1962 on the Lizard Peninsula, Goonhilly was at one time the largest satellite earth station in the world with 61 satellite dishes.

The historic Cornish station received the world's first live transatlantic television broadcast and played a key role in many ground-breaking broadcasting events, such as the Olympic Games, the 1969 moon landings and 1985's Live Aid concert.

Today the station handles computer data, TV signals and about 10 million telephone calls a week. In the 9/11 terror attacks, Goonhilly provided alternative routes for data after communication systems in the US were down.

Goonhilly was also one of Cornwall's most popular tourist attractions with around 80,000 visitors a year.

However, in 2008 the station's owners British Telecom (BT) ceased most operations at the site and moved many of the dishes to England. The decline of the complex, by then threatened with demolition, continued further as in 2010 BT decided to close the site's visitor centre.


New consortium to bring Goonhilly back to forefront of communications technology

After years of decline, on 11th January 2011 it was announced that Goonhilly Satellite Earth Station is to be sold to a consortium which will relaunch the station as a space science centre.

Once a pioneering facility in international communications, Goonhilly will now be at the forefront of world-leading radio astronomy projects and deep space exploration.

Some of the satellite dishes at the station will be upgraded to make them suitable for deep space communication with spacecraft missions, as Goonhilly will now transmit signals to space shuttles visiting the Moon, Mars and beyond.

The site will work with the European Space Agency (ESA), NASA, and will be connected to the largest telescope ever to be built: The Square Kilometre Array (SKA), a €1.5 billion collaboration of 20 countries which may provide answers about the origin of the Universe.

GES Chief Executive Ian Jones said the space sector is growing rapidly and there is a world shortage of download capabilities for manned space travel support.

Goonhilly has traditionally been an important source for skilled jobs in Cornwall. The redevelopment of the station is expected to generate many new jobs and business opportunities as the site becomes a world-class example of space research and education.


Arthur and Merlin to communicate with deep space

Goonhilly's giant satellite dishes were nicknamed after characters in the Arthurian legend, much of which takes place in Cornwall.

Arthur is the site's oldest dish and the world's first parabolic satellite communications antenna. It weighs 1,118 tonnes and its dish measures 25.9 metres in diameter. Together with Brittany's dish at Pleumeur Bodou, Arthur was the first to received the first transatlantic broadcast via the Telstar satellite on 11 July 1962. In those days, the station only had to deal with one television channel or 500 simultaneous telephone calls.

Built in 1985, Merlin is now Goonhilly's largest dish with a diameter of 32 metres and just 395 tonnes of weight. Other arthurian dubbed dishes at the Cornish station include Guinevere, Tristan and Isolde.

Tourists will be able to see Arthur and Merlin again as Goonhilly Earth Station Ltd plans to upgrade and reopen the former visitor centre as an Outreach Centre promoting space science for visitors, including local residents and schools.