The river, used since the Middle Ages for iron works, is to have a pioneering hydro scheme which will generate power for the village and distribute the profit within the local community.


A project to install a micro hydro-electric scheme in the Angiddy valley near Tintern in Monmouthshire, South East Wales, has been approved by the local planning authorities.

The scheme will produce electricity from the water in the Angiddy brook, a fully renewable and sustainable source. The amount of electricity generated is the equivalent of supplying 44 homes and will reduce carbon emissions by 71 tons annually.

The scheme will also practically inform and educate about renewable energy from sustainable sources and the promoters expect the project to inspire similar schemes in other streams and brooks.


Hydro scheme will link in with the Angiddy Valley's industrial heritage 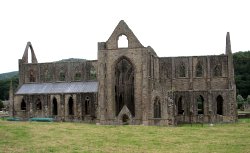 The Angiddy has been a source of power for hundreds of years, and supporters of the project highlight that a modem hydro scheme was a logical step within the historic context of the valley.

Water driven mills have been present at the Angiddy valley since medieval times, and archaeological evidence of extensive non-ferrous metal processing was uncovered within the complex of the Cistercian Abbey of Tintern.

As a result of government policy in the mid 16th century, moves were made to make the country less dependent on imports of brass and iron wire. A water powered wire making industry was established at Tintern in 1566 due to its proximity to sources of iron ore and the reliable source of water power on the Angiddy stream.

A large quantity of sites relating to the industry have been found in the the valley, such as charcoal processing areas and remains of housing for the workers.

There was continual development along the Angiddy Valley through the 18th and 19th centuries, but most sites were closed by 1843 and by the early 20th century all work had ceased.

But in 2002 a community consultation exercise brought back the idea of using the Angiddy as a source of power.

Experts in hydroelectricity installations provided a feasibility study and reports were presented to the community in 2004. As the feedback demonstrated overwhelming support for the scheme, members from the community came together to form Tintern Angiddy Project Ltd, a “Not for Profit" company which will manage the scheme.

Phil Powell, technical director of the Tintern Angiddy Project Ltd said "Tintern used to be one of the industrial centres of the country, all we are doing is modernising what was there before."

The scheme will take water from the Beaufort Pond dam in the Angiddy valley and pipe it underground, down the valley, for a distance of 1 kilometre and a vertical drop of 27 metres to a turbine, which will generate the electricity, and then to return the water to the Angiddy brook.

The pipeline will be routed through woodland, along existing footpaths, skirting the historical ironworks site and avoiding the few residential properties in the valley.

The turbine will be housed in a small building, approximately the size of a single garage, and constructed of natural stone with reconstituted slate on the roof. 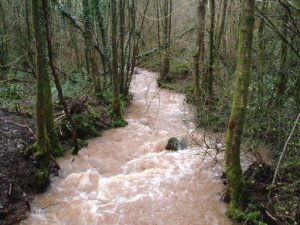 On exiting the turbine, the water will rejoin the Angiddy brook via a pipe to avoid bank erosion.

The scheme will generate up to 192 MWh of electricity annually. This is the equivalent of supplying 44 homes and reduces carbon emissions by 71 tons annually.

All of the electricity generated will be fed into the UK's National Grid, via an underground cable running back up the pipe trench to a transformer on an existing electrical distribution pole.

The electricity will be sold to the National Grid, and will result in an annual surplus of £20,000. As the scheme's management company Tintern Angiddy Project Ltd is a "Not for Profit" organisation run by volunteers, this money will be made available to be spent on community projects within Tintern.

Day to day monitoring of the scheme will be carried out by Angiddy Project Ltd volunteers. Because of the simplicity of the scheme, this will only require several hours per week.


Profit to be distributed within the community

The electricity generated by the hydro scheme is expected to return an annual profit of £20,000 per year, which will be distributed within the local Tintern Community to support improvement projects, clubs and organisations and sustainable energy projects.

The scheme's management company, Tintem Angiddy Project Ltd, a limited "Not for Profit" company run by volunteer residents living in the vicinity of the Angiddy valley, will donate the annual profit to a Committee made up of representatives of the various local organisations. It will then be up to the local Committee to decide how to spend the money.

The promoters of the project expect the scheme will also serve as a case study about the local use of renewable energy from sustainable sources, which could lead the way to similar projects around the world and may attract tourism to the area.

Funding for the project cost £320,000 and was provided by number of public organisations including Monmouthshire County Council, Environment Wales, Rural Community Action, and the Wye Valley Area of Outstanding Natural Beauty (AONB).

The site is located within the Wye Valley Area of Outstanding Natural Beauty (AONB), an internationally important protected landscape containing some of the most beautiful lowland scenery in Wales.

The project had to assess its likely impact on issues such as biodiversity, loss of trees, visual impact, implication for the water levels and impact on the Listed Building among others. Various studies and surveys were commissioned to ensure no detrimental effects on the flora and fauna.

The scheme, which is largely underground, has been designed to limit visual impact and will not produce any pollution in the form of noise, dust, reflected light or fumes.

The turbine house will be located within a small hut finished in natural stone. The building will be sited in the woods surrounded by trees, well screened and not visible in the wider landscape, and once the electricity has been generated it will be connected to the grid via an underground cable.

The project had the support of the Countryside Council for Wales, Wve Valley Area of Outstanding Natural Beauty (AONB), Friends of the Earth, and Cadw - the historic environment service of the Welsh Assembly Government.

Supporters of the scheme highlighted that the project is an innovative and truly sustainable example of how renewable energy generation can be appropriately implemented within a protected landscape.