French oil giant Total and three other parties have been charged for their role in Brittany's worst-ever environmental disaster, in a Court ruling that could establish a legal precedent for responsibility in maritime pollution 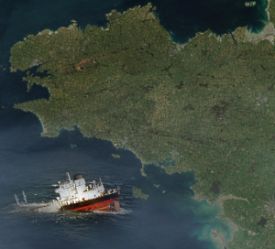 Marine fauna and flora were ravaged as the oil slick killed over 100,000 birds, the largest recorded number of seabirds to have been killed by an oil spill. Fishing and tourism business were severely damaged, and a government institute admitted that volunteers cleaning oil-covered beaches risked developing cancer.

After seven years of investigation, a French Court opened the Erika trial on 12th February 2007 as one of Europe's biggest environmental cases.

Environmental groups, hotel businesses, fishermen, local councils, the Breton devolved government and the French state joined the lawsuit and claimed €1 billion in compensation from oil giant Total and 14 other defendants, which denied any responsibility.

Last 16th January 2008, the Court finally ruled that Total was guilty for "carelessness" in chartering the rusting tanker and for the "ecological prejudice" of the subsequent oil spill. The Italian owner and the manager of the Erika were also found guilty of reducing maintenance work on the ship in order to save money, and the Italian certification company was found guilty of declaring the tanker seaworthy without undertaking the necessary checks.

Legal experts admit that the ruling could set a new precedent for responsibility in maritime pollution.

Under maritime law, cargo owners that charter a ship are usually precluded from responsibility. Furthermore, the labyrinthine ownership arrangements of some international shipping companies make it difficult to establish legal responsibilities.

The Erika was owned by Italians, chartered by a shipping company registered in the Bahamas, sailed under a Maltese flag, crewed by Indians, and the cargo belonged to French oil company Total.

The ruling found that the real point was not in the limited responsibility of the cargo owner but on a fault of “carelessness" which had provoked the accident.

During the four month trial the Court heard France's Bureau of Inquiries into Sea Accidents blaming rust and a lack of maintenance of the tanker for the wreck. Environmental groups argued also that Total had ignored safety regulations.

The ruling recognised the risks inherent to maritime transport but stated that Total was “guilty of imprudence” for not inspecting the ship in a proper manner, which had a "causal role in the sinking and as such provoked the accident."


Court ruling could set precedent for responsibility in maritime pollution 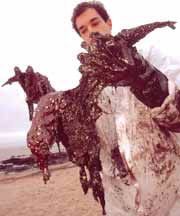 The Court's sentence was widely welcomed by the civil parties as it clears the way for Total to be sued by local councils, regional authorities and environmental groups for the impact of the spill, for anything up to €2 billion.

Legal experts believe the sentence could snowball around the world, establishing a precedent for suing corporations over major ecological disasters.

Greenpeace lawyer Alexandre Faro believed that the ruling would have important repercussions for the chain of companies involved in shipping and predicted that the verdict would offer a lesson for other companies: "This will have important repercussions on the chain of responsibilities. If the field of responsibilities is widened, we will increase the possibility of repairing similar disasters and we will give an incentive to companies to become more virtuous."

Total's lawyer Daniel Soulez-Lariviere announced his company would appeal the sentence on the grounds that the ruling did not reflect international oil-pollution conventions: "By assigning liability to Total, the Court's verdict could create confusion concerning the responsibilities of the players and have the contradictory effect of making shipping less safe."

Total's appeal against the ruling will effectively suspend the fines and set a new trial in a year's time, presumably after the forthcoming Prestige court case in Galicia.

Région Bretagne, Brittany's devolved government, has welcomed the ruling as “historical” but expressed disapointment on Total' decision to appeal against the sentence.

Breton President Jean-Yves Le Drian said that “I regret the attitude of the oil group, contesting a fair ruling that would keep rust buckets off our coastline.”

Following the ruling, the oil company had offered a financial settlement of €5,5 millions to Région Bretagne under the condition that the Breton government would not pursue for further compensation in Court.

President Le Drian rejected the idea of any financial settlement with Total: “That settlement offer only says that Total does not respect the Breton people.”

“This Court case is not against Total and it's not just money what we are after. All this is about is to clarify international maritime Law. In this Court case we will not change Law for money”, he said.

Maltese-registered tanker Erika, laden with 31,000 tonnes of heavy fuel, is faced with critical structural problems off the southern coast of Brittany in very rough sea conditions. After sending an alert message, the captain informs the French authorities that the situation is under control.

The captain sends a Mayday at 06:05 AM alerting that the ship is breaking in two. A rescue operation is immediately launched in extremely difficult conditions by the French and the British Royal Navy. At 08:15 AM the Erika splits in two, releasing some 10,000 tonnes of fuel.

The bow and stern of the tanker sink some 30 miles south of Penmarc'h, southern Brittany. The two parts of the wreck end up 10 km apart from each other, 120 m deep. Initial aerial survey missions report slicks estimated at 3,000 tonnes moving towards Brittany.

The oil slick reaches the Southern Finistère coast in Brittany. The rest of the country is hit on the following days.

French Minister of the Environment Ms Dominique Voynet declares that “This is not the catastrophe of the century” as the military, firemen and thousands of volunteers spend the Christmas holidays fighting against an estimated 20,000 tonnes of heavy toxic fuel. The oil slick reaches the banks of the Loire river covering some areas with an oil layer of up to 30 cm thick. The slick provokes further environmental disaster with the death of over 100,000 birds in the areas affected. Three months later, the French government warned volunteers cleaning oil-covered birds that they risked developing cancer and should stop trying to save them.

In the middle of public rage against the French oil company and charterer of the Erika, Total's CEO Mr Thierry Desmarest announces his company will pay the €61 million bill for the pumping of the 11, 245 tonnes of fuel remaining in the tanks of the sunken ship, but says that Total is not liable for what has happened.

The Erika trial opens just as Total, the fourth largest oil group in the world, announces annual profits of €12 billion. Up until here, the company had already paid more than €200 million on cleanup efforts.

A French Court declairs Total liable for the 1999 Erika fuel spill and orders the oil company to pay a €375,000 fine for maritime pollution and €192 million in compensation for Brittany's worst ever oil disaster. Several days later, Total announced they would appeal the sentence on the grounds that the ruling did not reflect international oil-pollution conventions

» www.cedre.fr/uk/spill/erika/erika.htm
Information about the Erika oil slick, gathered by Brittany's Centre for Research and Experimentation on Accidental Water Pollution (CEDRE)

» www.proces-erika.org
(In French only) Official website of the local councils and regional administrations participating jointly in the Erika lawsuit.

» www.affaire-erika.org
(In French only) Information website made by Greenpeace on the Erika oil slick and lawsuit.