One small island off the west coast of Ireland. Three priests. One housekeeper. A bunch of nuns. And possibly the best Irish comedy ever.

The best of Irish comedy 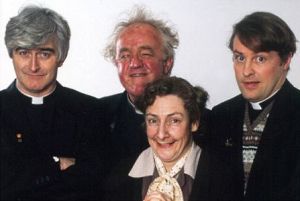 Father Ted was a very popular TV comedy which ran for three seasons totalling 25 episodes during the mid-nineties.

The comedy was based around the lives of Father Ted and his friends Father Dougal and Father Jack, who were banished to the remote Craggy Island because of their embarrassing conduct. The three clergymen lived with their housekeeper Mrs Doyle and were watched over by Bishop Len Brennan, who made frequent visits to the island. Despite being in the middle of nowhere, the three priests always ended up getting into awkward situations.

Created by Irish writers Arthur Mathews and Graham Linehan, the series are considered by many as a cult comedy and the essence of irish comedy.

Father Ted was based, according to the writers, on real people they knew, but with greatly and comically exaggerated characteristics.

For some, the series were sometimes controversial due to its humouristic interpretation of Ireland's religious decency. For others, the show was like watching a satirical documentary.

2008 marks the 10th anniversary of Father Ted's last episode and also the death of the show's star, Dermot Morgan, who died unexpectedly of a heart attack aged 45, on 28 February 1998, just 24 hours after finishing the recording of the last episode of the series.

Ten years after the show went on air, Father Ted has sold more than 1 million DVD box sets and is still being shown in many TV channels around the world.

Father Ted Crilly
The central character in the series, played by Dermot Morgan, Father Ted is the most normal of the priests on the island. He was sent to the remote Craggy Island for misappropriation of Church funds which he allegedly spent on a gambling spree in Las Vegas.
Father Ted is a sympathetic character who dreams of leaving the island and becoming a wealthy priest involved in showbusiness and living somewhere near a big casino. Father Ted maintains a long standing feud with Father Dick Byrne from Rugged Island.

Father Dougal McGuire
Dougal, played by Ardal O'Hanlon, is a childlike, naïve young priest who fails to grasp basic facts about the world and was sent to Craggy Island for a mysterious incident involving a group of nuns and a Ferry. He is Father Ted's best friend in the island, although the often can't understand what Ted means.

Father Jack Hackett
Played by Frank Kelly, Father Jack is an old violent, foul-mouthed drunk, who was exiled to Craggy Island for all of the above. He hates nuns, spends most of the time dreaming of alcohol and girls in his armchair, and his vocabulary consists mainly of 'feck', 'arse' and 'drink'.

Mrs Doyle
Played by Pauline McLynn, Mrs Doyle is Father Ted's decent housekeeper. She is obsessed with making tea and cakes as well as cleaning the living room window. 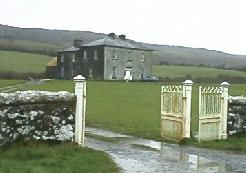 Other characters:
There are many other priests and islanders with recurring roles in the series. Some of the most popular ones are Bishop Brennan, Father Ted's dictatorial boss, who has a secret son and girlfriend in California; Father Dick Byrne, Ted's arch-nemesis on the neighbouring Rugged Island; Tom, an insane yet polite islander; Pat Mustard, the heary milkman who has sex with all the island's housewives; and John and Mary O'Leary, the local shop owners who make numerous attempts to murder each other while striving to appear much in love in front of Father Ted.

Although Father Ted only lasted for 3 seasons, its impact on viewers was enduring. The series spawned a string of catchphrases that are still quite well known in Ireland and Great Britain, most notably Mrs Doyle's "Go on, go on, go on" and Father Jack's alcoholic cursing "Feck!", "Drink!", "Arse!".

Father Jack Hackett's iconic “Feck!” caused perhaps more controversy than any other aspect of the comedy.

The word “Feck” is actually not a swearword and comes from the Irish word 'feach' or 'feic' which means “look” and is used in such a way as to grab someone's attention.

Yet, it was used in the series as an Irish curse, by the way of euphemism for the “f-word”, as Mrs Doyle would say.

Mrs Doyle's "Go on, go on, go on" was brought back again in a television advert campaign for the United Kingdon's Inland Revenue in 2001.


The annual Ted Fest, The Friends of Father Ted Festival

Held mainly in the Aran Islands, off the coast of County Galway, the Ted Fest is the world's original gathering for fans of Father Ted.

The tribute festival was first organised in 2007 by a group of friends from Galway to mark the anniversary of the death of Dermot Morgan.

During a weekend in February, hundreds of followers gather in a fictitious Craggy Island for a sacreligious celebration of priesthood, drink and cheating.

A number of events take place at the festival, each themed in association with the comedy series, such as the Father Jack Cocktail Evening, the Father Dougal Breakfast Movie Charades, the Lovely Girls Contest and Charity Auction, Toilet Duck Comedy Awards, and A Song for Europe.

The location of the Ted Fest is decided in the Craggy Island World Cup, a five-a-side football match which decides who will be “The Real Craggy Island” for the coming year.

The 2007 inaugural match was won by Inis Mór, the largest of the three Aran Islands, which was subsequently declared "The Real Craggy Island". The runner-up, Inis Oírr, received the title of “Rugged Island”.

The Craggy Island World Cup, a parody of the "All-Priests Five-a-Side Over-75's Indoor Football Challenge Match" featured in the series, generated so much publicity that Irish World Cup stars John Aldridge and Tony Cascarino signed up for the event and Irish bookmakers Paddy Power even took bets on the outcome of the match.


Do you want to know more about Father Ted?

[DVD] Father Ted
Father Ted is one of those rare sitcoms that defies categorisation and its blend of satire, character comedy and anarchic surrealism has made it a cult favourite around the world.
Buy it from Europe [DVD Zone 2]..»
Buy it from North America [DVD Zone 1]..» 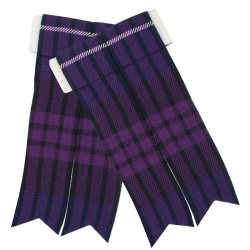 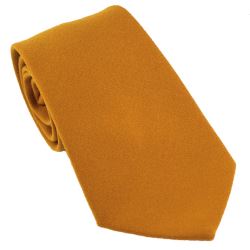