The Irish Canadian Club of Hamilton, Ontario, was founded in 1952 with the principal goal of helping Irish immigrants integrate into Canadian society by assisting in finding jobs and accommodation and by providing a social centre. 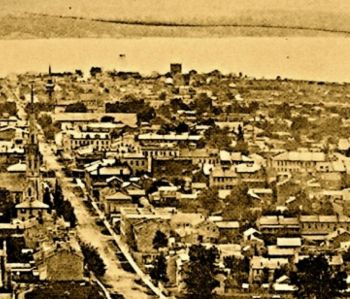 Between May and October of 1847 an estimated 38,000 Irish immigrants arrived in the port city of Hamilton, on the shores of Lake Ontario. Most were fleeing a devastating famine caused by successive failures of the potato crop.

Early Irish immigrants settled in the new area which became known as Corktown, which was named after the major embarkment point for Irish emigrants: the city of Cork in the south of Ireland.

Between 1871 and 1901 about 3,500 Irish immigrants arrived yearly. In 1871, they made up 13.5 per cent of Hamilton’s population. Many of the thousands who settled here only passed through Hamilton on their way to the United States, but those who stayed helped transform the town into a bustling city.

History of the Irish Canadian Club of Hamilton

The St. Patrick’s Society of Hamilton, founded in the 1830s, is the earliest direct antecedent of today’s Irish Canadian Club. Very much like our own Club, it was formed as a benevolent and cultural association to meet the needs of newcomers. Combining social welfare, moral uplift and entertainment, for many years the Society’s main public activity was organising the annual St. Patrick’s day celebrations. Behind the scenes, however, the Society played a vital role helping immigrants find family members, work and lodging. The Society seems to have died around 1857 but was revived in 1863.

The St. Patrick’s band invariably appeared at public processions; they also gave concerts at the Mechanics’ Hall or in the upstairs room of the original Town Hall on Market Square. The Society occasionally hosted public lectures. By the late 1870s, it had given way to the Emerald Association. Twenty years later, the name followed the people from Corktown to the North End, reincarnated as the St. Patrick’s Athletic Club.

During the summer of 1952 a stalwart band of a dozen people gathered to discuss how to form an Irish association in Hamilton. By the time the founding meeting was held, in November 1952, nearly 40 people were involved.

The Club unwittingly but inevitably followed the pattern set by the St. Patrick’s Society. Blazing a trail which would be followed by the Irish Canadian Aid and Cultural Society of Toronto and similar bodies in Windsor, Sudbury, London and Peterborough, the founders defined the Club’s purpose as helping other Irish immigrants integrate into Canadian society. The first task was still the same, to offer assistance in finding homes and jobs. For many years, the Irish were enormously lucky to land in Hamilton and find surrogate parents in the persons of Jim and Chris Lyons. “Jim would walk the feet off him, taking newcomers around to look for work”, recalls Kieran Hynes. And says Fred Morgan, Chris Lyons always greeted anyone new with the same words, “How are ye doing? And did ye write home to your mother?”

Finding work was not always easy. One hard case was Tom Fallon. Asked what he did, he replied, “I shoe horses, oh aye, and I’m a thatcher too”. Not in great demand at Stelco!

No–one lives on bread alone; the craic was just as important. The Club’s first public event was a dance at the British Imperial Club to celebrate St. Patrick’s Day, 1953.

That first dance on a Tuesday night was a sellout. It was so successful the Club decided to hold weekly dances and the BI Club, thinking Tuesdays were a dead letter anyway, was happy to rent the space. For nearly five years, the Irish Club Tuesday night dance was a fixture, the pub–away–from–home where the Irish could meet to gossip, trade their woes and joys, meet their future spouses, make connections and find new work, get tips on the horses and pointers to homes.

The success of the dances led to the obvious next step, to find their own place. In 1958 Pat Roche, Burris Ormsby, Jack Daly and Jim Lyons signed the mortgage on a house at 147 Erie Avenue. Five years later, the mortgage was paid off in full. During these years the Club’s property met all the original goals—it was the Irish community’s own social centre and the apartment upstairs provided accommodation for newcomers (who also took care of the place). Among the tenants were the McGibneys, the Doyles, Pat Walsh, and Harold Lavery.

It was not all fun and games. The 1950s and early 1960s were not without their hardships. Irish immigrants in those years were not the shining new graduates of the Celtic Tiger. Many came as families, with lots of children. Those were very busy years for the Good & Welfare Committee. The Club’s minutes often report, “a donation was made to an Irish family.” Help for the needy, always recorded anonymously, might be a coat for a child, a sack of coal for the furnace, the cost of a funeral, rent money, a Christmas turkey, or even a plane ticket home to Ireland. “And they always paid it back, one way or another,” says Fred Morgan.

The Irish Club was one of the first groups to organise charter flights. The regulation requiring all ticket–holders to be club members led to a scramble to sign up people to fill the first flight. They went to Ireland in September 1963 for three weeks, allowing GAA fans to get to the All–Ireland football final. On arrival, Kieran Hynes and Danny Rogers went straight to the Mansion House to present a letter of greetings from the mayor of Hamilton to his counterpart in Dublin. The inevitable gremlin popped up—two couples visiting family in Manchester were delayed and missed their connection for the return flight from Dublin. The Club paid for their tickets on the next regular flight. Good deeds, great rewards. Word spread and the Club’s flights, sometimes twice a year, were fully booked for the next decade.

By 1965, the membership had outgrown the Erie Avenue space and the Club moved to rented space on Fennell Avenue. For technical reasons, having to do with the older darker licensing laws, the new clubroom was another echo from our Corktown past—a shebeen. Selling drink was illegal, but, well, ways can be found… And a discreet veil of silence (and the statute of limitations) can fall. Despite this shady background, the Club was well–established. Its members were in their prime and the range of activities reflected this. From 1965, the Club organised the annual Hamilton Feis—held on the July 1 weekend in Civic Stadium. Up to 1100 competitors participated and thousands of spectators came from all over Canada and the north–eastern United States. The Feis was an enormous undertaking: arranging schedules, building stages, selling tickets, providing refreshments and accommodations, all done entirely by volunteers. From 1966, a highlight of the Feis was the hurling and Gaelic football games presented by the Hamilton Robert Emmetts Gaelic Athletic Club, which was always closely associated with the Irish Club.

The Ladies’ Choir, formed at an impromptu session in the Club in 1968, added another tone to our multicultural contributions. They were in great demand down the years, performing annually at St. Patrick’s day celebrations and regularly at Kiwanis music festivals. They sang at the gala opening of Hamilton Place in 1973 and for the Irish Ambassador in 1984. The best audiences were often the shut–ins, in hospitals and retirement homes.

The Club’s men finally formed their own choir in 1994, at the instigation of Dan Galvin. The Club boasted its own in–house theatre group who presented plays from the 1960s to the 1980s. In the 1990s, the Club presented performances by seanchaí Jonathan Lynn and Bloomsday celebrations of James Joyce by Toronto’s Anna Livia Players.

In 1970, more suitable premises were found in a former church at Parkdale and King. Once again, the mortgage was quickly paid off and the Club has been debt–free ever since. After a brief tussle with some of the neighbours who worried that a load of rowdy Irishmen would lower the tone, the new club opened with a (legal) bar in the basement. Upstairs, in the dance hall, the club moved onto the national stage, when Fred Morgan persuaded Denis Ryan to use the room as the set for taping a weekly Irish variety and music show for CHCH TV hosted by Ryan’s Fancy and Tommy Makem.

By 1980, declining membership and rising costs led the Club to sell the premises on Parkdale and move to our current home on Concession Street, which we bought outright. Growing prosperity in Ireland and Canada lessened the load on the Club’s resources, but it also meant fewer immigrants were arriving. Without new blood, both the Feis and the GAA club were forced to fold in the 1980s. The soccer team, however, continues to compete in the city league.

Nevertheless, the Club has never forgotten its original purpose. Newcomers are still made welcome. We still extend the hand of fellowship and sympathy. The Club continues to look to the future, and since 1969, we have awarded annual scholarships—named for Pat Walsh, in recognition of his loyalty and dedication—to university and community college students.

The latest link in the chain of Irish voluntary associations is the Wearing of the Green Committee. Established in 1986 by local businessmen Bill Gardner and Ed Cummings to help promote Irish culture, the committee hosts the annual St. Patrick’s Day luncheon. Corned beef and cabbage and corny jokes aside, the luncheon salutes the committee’s choice as Irish Person of the Year: someone of Irish ancestry who has contributed to the betterment of the community. The committee worked with the Irish Club, the Ulster Club and the Ministry of Canadian Heritage to create the monument to the Irish contribution to Hamilton, unveiled in Gage Park. Repeated attacks by vandals forced the removal of the monument to its current site at City Hall. There, on St. Patrick’s Day, the Wearing of the Green hold a brief ceremony in memory of our ancestors.