Governments of Wales and Brittany sign 'Memorandum of Understanding'

Links strengthened between Wales and Brittany 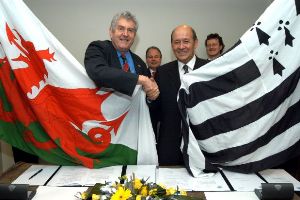 The Memorandum of Understanding was signed in January 2004 in Welsh, French and English, and ratified in the Breton language on Tuesday 12 October 2004 by First Minister Rhodri Morgan and President Jean-Yves Le Drian at a reception in St. David’s Hotel & Spa, Cardiff Bay.

President Le Drian was accompanied by a delegation of regional council members and representatives from Breton artistic and cultural organisations and the media. The President and delegation spent three days in Wales at the invitation of the Welsh Assembly Government, visiting projects and areas of cultural or linguistic interest around the country.

Lord Elis-Thomas, the Welsh Assembly's Presiding Officer, said "It is a pleasure to welcome Monsieur Le Drian to the National Assembly for Wales and to offer this opportunity to meet and address Assembly Members. Brittany is a European region with whom Wales shares particularly strong links. These links are both age old yet dynamic and still evolving. They reflect a shared cultural heritage and the challenges of our common geographies".

The First Minister Rhodri Morgan said: "I would like to warmly welcome the newly elected President of Brittany, Monsieur Le Drian to Wales. We have so many things in common with Brittany. We are Celtic cousins on the Western Atlantic Coast of Europe; each with a population of around 3 million; and we both aim to modernise our industry, tourism, agriculture and continue our ongoing investment programme in broadband and telecomm infrastructure".

"I hope that through this Memorandum of Understanding, we will continue to work closely together in the future".


The Memorandum of Understanding sets out the following objectives:

Deputy Presiding Officer, First Minister, Assembly Members, dear friends, Brittany, through me, fully acknowledges the honour bestowed upon it by our being solemnly received here in your parliament. Your Assembly is no ordinary forum: it is at the same time the symbol of a strong and proud past brutally interrupted by the failure of Owain Glyndwr, and vanishing after the Act of Union of 1536, and of rebirth, through its restablishment during the reform of 1997. Through this devolution that you wanted and obtained, you have risen to the position of a responsible, autonomous and representative Assembly, opening the road to other ambitions without denying that you are part of the United Kingdom. You are now the forum of renewed and decentralised democracy. I pay homage to all of you as representatives of the Welsh people, and more specifically to the Presiding Officer, Lord Elis-Thomas, who could not be here today, and the First Minister, Rhodri Morgan, with whom my predecessor had begun the relationship and commitments between Britanny and Wales.

I also pay tribute to your history and struggles. When I was much younger, my first knowledge of Wales came from a romantic reading of Richard Llewellyn’s bestseller, How Green was my Valley. The memory that I have of that book is of tough times and transformations, but also of the strong determination of the characters. That determination still very much exists. You have gone through the trauma of your first industrial revolution, with the harshness of the coal mines, many dramas, towns and ports being built too quickly, and the wealth, but also, and above all, the misery, that all this engenders. You have also known the rejection of poverty and of exploitation, which expressed itself through an original workingmen’s movement that first of all found its expression in a particular radicalism embodied during his time by your illustrious leader, Lloyd George. You have also known emigration, the abolition of your customary laws, the renouncement, through statute, of your language and then, later, the new trauma of pit closures and the necessary restructuring of your economy, but you have always known how to keep your determination and pride. That not only means that you win at rugby, but that you will never give up and, just like the red dragon, you will never compromise your history and your destiny. That is what gives your new Assembly strength and vigour.

That is also what makes us Bretons and Welsh so similar. The Celtic community has shaped our societies. History, moral, rural and religious traditions, language and culture are all marked by this common heritage. What we reject and our belief in the future of our peoples brings us together. Our geographical territories are also similar in terms of our peripheral position, coastal nature, equivalent populations and similar economic and demographic weight in comparison with the nation as a whole. Furthermore, we have in common a shared belief that education and training are the axes of development and growth, and that everything possible must be done so that access to knowledge for the next generation is made easier for all. You are proud of your successes in this regard, and so are we.

You strongly assert your identity, and so do we, but we still share the same values of openness to the world and to others. The assertion of our identity is, for both of us, the opposite of the insular identity that can be so damaging. The fear of others and of the unknown has no place in our collective behaviour. You have developed that faith in such a way as to have transformed your national saint’s day into a day of world peace and friendship between peoples. We are not only Celtic cousins, but brothers in our convictions, which is why we have so much to do together, and why we want to do so much together. In many areas you have shown us the way. The regeneration of your language is active and has progressed significantly since the Welsh Language Act 1993. You have been able to create suitable tools for communication and training and have seen excellent results, for example, through the Welsh Books Council, which we have visited, and the Welsh television channel, which we also visited. We want stronger co-operation between our office for the Breton language and that for the Welsh language in the framework of the European network of offices for languages of which Wales has been president. However, we should go further than that: our partnership cannot simply be a linguistic one, even though that is important.

We want to act together by twinning our secondary schools, strengthening inter-university exchanges, and giving more strength and scope to the European mechanisms that already exist, such as "Socrates" or "Erasmus". We also want to be partners in the EARLALL European network of local and regional representatives for lifelong training. In the same spirit, we want to encourage more twinning between our towns and villages. There are already 48 such arrangements and many more can be created. Exchanges of young people and of sportsmen and sportswomen will strengthen our friendship in the future.

However, we must go further. The economic transformations that we are going through and the greater ones that are before us mean that more active co-operation is required. You have created an economic development agency that helps your companies and sectors and supports your presence abroad. We are building a similar presence and we propose uniting and cross-fertilising our networks. This cross-fertilisation could take the form of annual fora for our companies, especially those that are strong on innovation and new technology. The same logic could inspire tourism, where we have very many assets, especially in the maritime area, and where Brittany has great knowledge that it could share.

We also want to act together at the European level. The enlargement of the European Union has meant that the centre of gravity is going eastwards and therefore our peripheral position has been accentuated. This geographic position must not lead to exclusion, which is why we must act together with greater force in the Conference of Peripheral Maritime Regions of Europe in order to reinforce the Atlantic arc. This also means that we have to mobilise our energies so that future cohesion policies do not exclude our regions, which are still penalised by economic transformations and our marginal geographical positions. The fact that the future constitution of Europe recognises regional realities, and stipulates that the political aim of the EU must be balance, greater equilibrium and territorial cohesion, is progress. However, many Governments, ours among them, have decided to limit the common budgetary line to 1% of European gross domestic product per capita, which does not give us sufficient means to act. Similarly, the maritime region limit of 150 km for two regions to have financed and supported co-operation is not satisfactory, because, even with our Cornish friends, we still lack 3 km in order to be able to have this European funding. This is rather stupid. Therefore we must act together to defend our position in the European Union. The European Commission’s decision to have a Green Paper on maritime policies will be another opportunity for us to act together.

We will therefore have many opportunities to work together in the future. All this rests on our common culture and creativity. We are happy that Alan Stivell and Jean-Louis Jossic of the group Tri Yann were able to come with us today. All this work will also rest on our common festivals. We are also happy that Jean-Pierre Pichard and David Petersen have been reunited to think about future inter-celtic festivals. This also rests on our common emotional strengths, symbolised by our common anthem, written by your bard, Evan James, and taken up again by Taldir in ‘Bro Goz Ma Zadou’, which we sang together last night.

We are the lands of our fathers, as our anthem says. Ours are ancient lands and, despite all the hiccups of history, we have been able to preserve our languages and commonalities. We have often walked side by side, sometimes not seeing each other, but never forgetting each other. I hope that a new era of our being reunited is beginning, in which our lands will have a future.

Jean-Yves Le Drian
President of the Regional Council of Brittany