Lying at 59 degrees north, Thurso is the most Northern wave spot on the planet to host a professional surfing event: the O’Neill Cold Water Classic Scotland.


Thurso is the most northerly town in mainland Scotland. Facing the North Atlantic, and at about the same latitude as Oslo (Norway), Moscow (Russia), and Juneau (Alaska), the area is often swept with gale force winds, blustery rain and snow.

With an average water temperature of just 6°C, many would say that surfing conditions in this part of the planet are far from ideal. However, Thurso is very well known to surfing fans from all over the world.

The solid ground swells coming from the north and the frequent southerly winds create ideal conditions which, leaving aside the cold weather, can rival the north shore of Hawaii.

Thurso has been a world-class surfing venue since the O'Neill Highland Open of the ASP (Association of Surfing Professionals) World Qualifying Series in 2006.

The event, which successfully attracted the attention of some of the world's top surfers, returned to Thurso in 2007 as one of the very few top "6 star prime" events on the tour, alongside legendary places such as Oahu (Hawaii) and Santa Cruz (California). 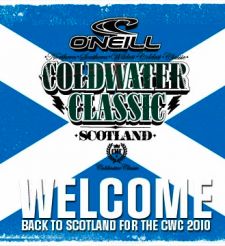 Since then, Thurso has been an annual top 6-star venue for the Cold Water Classic Series of the ASP World Qualifying Series, which spread across four continents.

The Cold Water Classic Series travel to Australia, New Zealand, South Africa, Scotland, Canada and the USA, and feature some of the coldest and most challenging conditions in the ASP World Tour event.

The Scottish leg of the tour, which is the northernmost event in professional surfing, is known to have the wildest conditions with low temperatures and persistent wind and rain.

In 2010, a particularly cold year, rivers in the area froze up and for a couple days surfing in Thurso East was not possible because of the chunks of ice coming down the river.

With its mobile format, the Coldwater Classic Scotland is free to choose between the fast reef break of Thurso East, the shallow hollow at The Bowl of Brim's Ness, and the classic beach break of Strathy.

As a traditional conclusion to the competition, the winner is presented with an historic Highland Sword in a beach-side ceremony -as well as $50,000 in prize money for the Series title winner.

Scotland's rich heritage and breathtaking scenery is considered by many participants as central to the Thurso event experience. Australian surfer Jarrad Howse said: "There's something about the history and heritage of Thurso that takes my breath away every year. From the drive up there through the snowy Highlands to the amazing slate bottom hollow waves, Scotland's northerly coast is my favourite stop on tour and I am not alone."

Thurso Cold Water Classic is held in early spring. The 2011 competition will be held from April 13 until April 19. To watch a live webcast of all the action, visit www.oneill.com/cwc