The Celtic League was born in 2001 as an annual Rugby Union competition involving teams from Ireland, Scotland and Wales. Today, the Celtic League is seen by many as the third major rugby league in Europe.

Celtic League was born on Friday 17 August 2001 with four matches in three countries in a brand new rugby tournament.

However, before that date, two seasons of a Welsh-Scottish League had already been played. Wales and Scotland had joined forces for the previous 1999 and 2000 seasons, with the expansion of the Welsh Premiership to include Edinburgh and Glasgow. In 2001 an agreement was made between the Welsh, Irish and Scottish rugby federations to create a new competition which would bring in the four Irish provinces. The Celtic League was born. 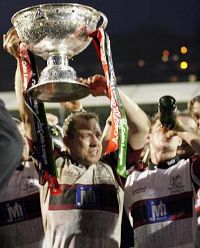 In 2003 it was decided that the Celtic League would become the sole professional league of the three countries, incorporating all four Irish, three Scottish and the five new Welsh (Cardiff Blues, Celtic Warriors, Llanelli Scarlets, Neath-Swansea Ospreys and Gwent Dragons). Also introduced for the 2003/2004 season was the Celtic Cup, a straight knock-out cup competition contested amongst the top teams of the League. The 2004/2005 season was the first season that Ireland agreed to use the Celtic League standings to determine which provinces would enter the Heineken Cup.

Today, the Celtic League season delivers a 22 weekend calendar which takes place between September and May. Celtic League matches avoid the traditional international weekends in November and during the Six Nations Championship. The Welsh, Irish and Scottish rugby unions now use the Celtic League as the sole determinant for European qualification and seeding. Currently, the Celtic League is seen by many as the third major rugby league in Europe after the English Guinness Premiership and the French Top 16.