Castell Henllys Iron Age Fort is a Scheduled Ancient Monument and one of many prehistoric hill forts in Wales dating to around 600BC. Castell Henllys is open to visitors between Easter and the end of October and, through innovative interpretation, helps visitors to understand what Iron Age life was like over two thousand years ago. 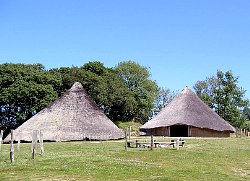 Castell Henllys is an Iron Age inland hill fort with substantial defences, well preserved evidence of internal occupation and buildings, and a monumental gateway of stone. The fort lies within twelve hectares of beautiful woodland and river meadows in the north of the Pembrokeshire National Park.

Castell Henllys (Welsh for "the castle of the Prince's court") is a unique visitor destination in Wales. It is the only Iron Age Fort to have roundhouses and other buildings reconstructed on their original, archaeologically excavated foundations.

Introduced by a visitor centre with exhibition and gift shop and explained by interesting interpretation panels, visitors stroll along leafy woodland and riverside paths, explore sculpture trails depicting myths and legends, pass by prehistoric breeds of livestock grazing in fields next to the path, before entering the hill fort itself. The reconstructed buildings are used to interpret Castell Henllys and the wider late prehistoric landscape of Wales. Various activities and events take place each week to enhance the visitor experience in addition to the daily guided tours.

Since 1991, Castell Henllys has become an important visitor attraction in north Pembrokeshire receiving around 30,000 visitors per year and providing a significant input into the local economy. The site is a model for innovative interpretation and a prime example of best practice in sustainable tourism.

Castell Henllys is a small inland Iron Age (500 - 100 BC) hill fort occupied in the late Iron Age and throughout the Roman period (100 BC - AD 400). During most of the Iron Age, Castell Henllys was a densely packed community of many families, and may have contained a population of 100-150 people. The fort was about half a hectare in area, defended on the east, south and west by steep scarps and ditches. One of the most unusual features at Castell Henllys is the chevaux-de-frise, an arrangement of small upright stones designed to slow down attackers to the fort.

Four roundhouses and a granary have been reconstructed on their original Iron Age foundations at Castell Henllys. Roundhouses as Castell Henllys were built using a vast range of materials including timber of many types and sizes, reed, clay, and rope. The walls of the buildings were built with hazel rods woven around stakes and subsequently plastered with daub (a mixture made up of clay, soil, dung, water and hay). The roofs are conical and thatched with water reed. The use of all these materials go together to produce roundhouses of great strength and comfort.

The Chieftain's Roundhouse was reconstructed over an Iron Age house platform with an internal diameter of thirteen metres. The interior of the roundhouse was carefully furnished and decorated to give the impression of wealth, comfort and status the occupants of a house like this would have enjoyed.

The reconstructed buildings are used to interpret Castell Henllys and the wider late prehistoric landscape of Wales. Various activities and events take place each week to enhance the visitor experience in addition to the daily guided tours; these include spinning and weaving workshops, living history demonstrations and storytelling, experimental archaeology, and other craft activities.

Castell Henllys hosts one of the largest training excavations in Britain. For six weeks every summer, students from all over the world join in the dig to learn the principles and methods of archaeological excavation directed by the University of York.

Castell Henllys has hosted an annual student training dig since 1981. Prior to its purchase by the National Park the site was owned by Hugh Foster, an entrepreneur interested in the Iron Age who set up the site as a commercial visitor attraction. In 1981 the excavation of Castell Henllys began and Foster started to reconstruct buildings using the archaeological evidence provided by the dig. Since then archaeologists have been carefully examining Castell Henllys layer by layer building up a picture of how people lived here over 2,000 years ago.

The fort is one of the most extensively excavated ever in Britain. As a resource for understanding the Iron Age, Castell Henllys is second to none, providing a unique combination of Scheduled Ancient Monument, archaeological excavation and experimental archaeology.